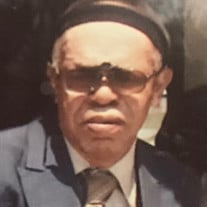 Lebanon, TN 74 Passed away at Quality Rehabilitation Center. Oliver David Catron affectionately known as “OD” or “Umc” was born May 31, 1944 to the late Oliver Catron and Tabitha Turner. He departed this life on March 4, 2019 at the Quality Nursing Home. Oliver was preceded in death by his parents: Oliver Catron and Tabitha Turner and his brother, Willie E. Lee. OD graduated from Wilson County High School and went on to complete course work from the Washington School of Art. OD later became employed at the Lamb Street Cooperation where he served as a Union Steward. After the death of his father he took over operating his father’s grocery store. OD was a renaissance man of many talents: he cooked, he sewed, he was an artist and a musician also a vocalist and wrote poetry and songs. OD confessed his life to Christ at an early age and was a loyal and dedicated member at the Pickett United Methodist Church where he served the remaining days of his life. OD leaves to cherish his memory one son, Oliver David, Jr; sisters: Katherine Turner of Harvey, IL, Maggie Benson of Lebanon, TN, Sally Palmer of Lebanon, TN and his brother, Fred Lee (Ruth) of Mt. Juliet, as well as a very loyal and dedicated friend, Bobby Seay of Lebanon, TN. He also leaves nieces and nephews: Gary Jenkins of Forth Worth, TX, Cathy McSwain of Chicago, IL, Vernon Turner of Harvey, IL, Benita Anderson of Lynwood, IL, Nicki Lee of Lebanon, TN, Eric Lee of Lebanon, TN, Keith Palmer of Murfreesboro, TN, Michelle Turner of Dallas, TX, Byron Lee of Nashville, TN, Adrian Lee of Hartsville, TN, James Edward Turner of Evansville, IN, Mary Madison of Chi- cago, IL, Trina (Rick) White of Mt. Juliet, TN and a host of relatives, cousins and friends. Please keep the Catron Family in your prayers.

The family of Mr. Oliver D. “OD” Catron created this Life Tributes page to make it easy to share your memories.

Passed away at Quality Rehabilitation Center....

Send flowers to the Catron family.