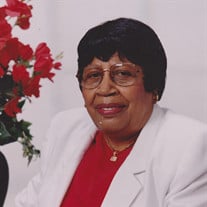 Mount Juliet, Tennessee Passed away at Tennessee Christian Medical Center. MILDRED CORRENE JENKINS, was born November 21, 1932 in Wilson County, Tennessee to the late Mr. Leonard Word and Mrs. Callie Burks Word. Correne began her eternal rest on December 10, 2014. She was married to the late Reverend Arthur C. Murray and to this union they were blessed with one daughter. She professed a hope in Christ at Hamilton Chapel A.M.E. Church. Correne later became a faithful member of Corona First Baptist Church. For many years she was a compassionate and spiritual First Lady with her late husband, Reverend Arthur Murray at Dickerson Chapel Church in Lebanon, Tennessee. Mother “Correne” was a hard working wife and mother who spent a lifetime caring for her family. Mother ”Correne” was known for her loving and kind hearted spirit to those she met. She was always willing to help others and was a member of the Helping Hand Club who served the community. Another one of her loves was baking. There was nothing like her Caramel Cake, Chocolate and Egg pies to top off a big meal. In 2000, Ms. Correne Murray was united in Holy matrimony to Deacon John E. Jenkins. She was blessed to be a part of a family whom she loved. She was a devoted and faithful member of the Corona Senior Choir and also served as a dedicated member of the Mother Board until God called her home. She was one who believed that you should be on fire for the Lord. She would often say, “I don’t want to be in no dry service”. She loved the Lord and enjoyed talking about His goodness. Her smile and her strolling shout will truly be missed. She leaves to mourn, a devoted husband, John E. Jenkins; a devoted daughter, Lisa (Homer) Hogg; four granddaughters: Stacia, Bethany, Jaylyn and Ashlyn Hogg; two great- granddaughters: A’miya Alexander and Amaire Hogg, all of Mt. Juliet, TN; two step-daughters: Alese (James) Batey of Hermitage, TN; Brenda (John) Thompson of Lebanon, TN; three step-sons: Preston (Tammy) Jenkins, Harry Jenkins, and Larry (Jamye) Jenkins, all of Mt. Juliet, TN; eighteen step-grandchildren, twenty-one step-great grandchildren, one brother-in-law, John (Virginia) Majors of Lebanon, TN; one sister-in-law, Nancy Word of Nashville, TN; one devoted niece, Melissa ( Larry) Johnson; two devoted nephews: Kenneth (Teresa) Word, and Larry (Vivian) Word all of Mt. Juliet, TN; devoted friends: Esther M. Hockett, Doris Sowell, Lila Carter, Edward and Fred Lang. Mildred was blessed with a host of nieces, nephews, other family and friends. Please keep the Jenkins and Hogg Families in your prayers.

The family of Mother Mildred Correne Jenkins created this Life Tributes page to make it easy to share your memories.

Passed away at Tennessee Christian Medical...

Send flowers to the Jenkins family.