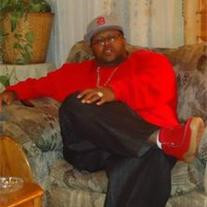 TO VIEW AND PRINT OBITUARIES OFF THIS SITE, CLICK ON RESOURCES, AND THE YEAR OF OBITUARY, THEN CLICK ON YOUR LOVED ONE'S NAME. Maurice Devon McGowan was born on September 29, 1963 to the late Jimmy Edward McGowan and the late Dianthia Yvonne McGowan. He was the first of two children born of this union. At the age of 15, Maurice was baptized at the Market Street Church of Christ. Maurice attended the Wilson County Public School system and was a graduate of Lebanon High School's class of 1982. Maurice enjoyed skating, dancing, and basketball. In the early 1980's when break dancing was popular, he formed a dance crew called "The Bodyrockers". As the captain of this crew he led them as they participated in numerous talent shows around the middle Tennessee area. The Bodyrockers also performed during halftime shows at Lebanon High School's ballgames and at the skating rink. Known for his comedic personality and charisma, Maurice was affectionately known as "Poopie", a nickname given to him at birth. As he got older, he decided he was not fond of being called Poopie and he then began to go by "World B. Free", a nickname that was self given because of his fondness for the game of basketball. This nickname was eventually shortened to "World", a nickname that stuck throughout the remainder of his life. Maurice was preceded in death by his father, the late Jimmy Edward McGowan, his mother, the late Dianthia Yvonne McGowan, his paternal grandparents George McGowan Sr. and Mattie C. McGowan, maternal grandparents Alfred M. White and Sallie M. White. He leaves to cherish his memory sister Dereathia "Penny" Neuble, daughter Chaunethia (Omar) Cason of Lebanon, TN; son Kevon Jamaur McGowan of Nashville, TN; daughter Madison Dawn McGowan of Nashville, TN; daughter Davian Jade Berry of Lexington, KY; granddaughter Omariona Debreyella Weir of Lebanon, TN; nephews, Keenon Ja'von Davis, Kobe Joaquin Neuble and Kemon Jaleel Neuble all of Lebanon, TN; uncles Jerry(Pat) McGowan, Joe Michael McGowan of Lebanon, TN, McArthur Stewart of Pontiac, MI, Darren White of Nashville, TN, Alfred White Jr. of Gallatin, TN; aunts Clara McGowan of Lebanon, TN, Nedra White and Joy White both of Atlanta, GA, Sidonie White of Nashville, TN, and Jode White of McKinney, TX. In addition, leaves many cousins and a host of friends. Online Funeral Service Program

TO VIEW AND PRINT OBITUARIES OFF THIS SITE, CLICK ON RESOURCES, AND THE YEAR OF OBITUARY, THEN CLICK ON YOUR LOVED ONE'S NAME. Maurice Devon McGowan was born on September 29, 1963 to the late Jimmy Edward McGowan and the late Dianthia Yvonne... View Obituary & Service Information

The family of Maurice "Poopie" aka "World" McGowan created this Life Tributes page to make it easy to share your memories.

Send flowers to the "Poopie" aka "World" McGowan family.