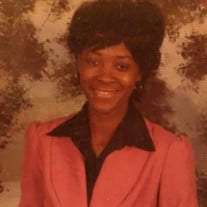 Lebanon, Tennessee 71 Passed away at her residence. Mary Alice Waters Adams, the only daughter born to her parents, Ollie and Evelyn Blair-Waters, who preceded her in death. Mary Alice born date is July 19, 1950. She received academic studies at The Market Street Elemen-ary School, which prepared her to further her education and graduate with the Class of 1968 from Wilson County High School. Being the die-hard Trojanette, she was...Mary Alice played a superb game when it came to basketball. After her graduation from high school, she soon after laboring in the industrial factories; decided to enter into the United States Army in 1971 and was honorably discharged. While on her tour of duty, she met and married Mr. Edward Adams, II. To this union two of their first and real loves were born, Edward Adams III “Bubba” and Alice “Poo-Poo” Adams who preceded her parents in death. From God’s grace and through his mercy, Mary Alice received and was highly favored as she rode the waves of life for three scores and eleven (71 years); often being batted by the angry seas life tend to serve unto man. However, because it is appointed unto man to die, on Thursday, August fifth in the year of twenty-twenty one, Mary Alice met her appointment and began her eternal rest. She leaves to cherish her precious , loving and everlasting memory, her companion of thirty two plus years, John Phillip Britton, one loving and devoted son, Edward (Samantha) Adams, III; one brother, James Lorenzo (Mary Sue) Waters; five grandchildren: Keantre Young, Shalethia Davis, Hunter, Maggie and Brayden Davis; great grand twins, Kavion and Kaliece Young “her twirps”. Numerous and too many to mention by name, associates, true friends, work colleagues, brothers and sisters in Christ. In observance of the CDC guidelines, and in light of the COVID-19 Delta Virus Variant we are still practicing 6-foot social distancing. Mask requirement and temperature checks strictly enforced. The family understands that due to the current concerns regarding large gatherings, many who wish to show their love and support in person will be unable to do so. Please leave your condolences online. Therefore, they would like to express their gratitude for all the thoughts and prayers extended to them at this time. We encourage you to leave condolences to the family via our website at www.neublemonumentfuneralhome.com. Please keep the Family in your prayers.

Lebanon, Tennessee 71 Passed away at her residence. Mary Alice Waters Adams, the only daughter born to her parents, Ollie and Evelyn Blair-Waters, who preceded her in death. Mary Alice born date is July 19, 1950. She received academic studies... View Obituary & Service Information

The family of Mrs. Mary Alice Adams created this Life Tributes page to make it easy to share your memories.

Passed away at her residence.
Mary Alice...

Send flowers to the Adams family.