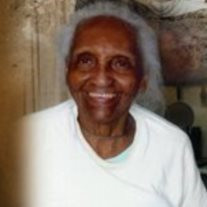 Mt. Juliet, Tennessee Julia Mae Felix was born on July 14, 1921 in Selma, Alabama to George and Frances Marzette. She was married to John Felix in Chicago, IL in 1961. She attended the Union B. Grade School in Summerfield, AL. She worked... View Obituary & Service Information

The family of Mrs. Julia Mae Felix created this Life Tributes page to make it easy to share your memories.

Send flowers to the Felix family.