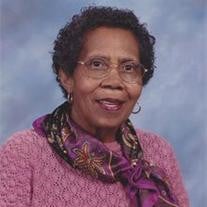 Mrs. Juanita R. "Nee Nee" Rhodes, 83, of Lebanon TN passed away on August 19th 2013 at her residence. She was a faithful member of the Market Street Church of Christ. She was a member of the committee of sending get well and sympathy cards.... View Obituary & Service Information

The family of Juanita "Nee Nee" Rhodes created this Life Tributes page to make it easy to share your memories.