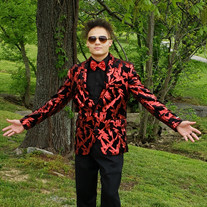 Old Hickory, Tennessee 18 On April 20, 2002, Angelita Upchurch and Alexander Rogers received a precious gift from God; Ezekiel Malik Rogers. Ezekiel, aka ZZ, Zeke or E-Z, was truly gifted fulfilling the meaning of his biblical name, "God's strength". Ezekiel revealed his strength as a competitive player in all the sports; he invested his time and energy in sports such as wrestling, soccer, volleyball, basketball, and football. He really loved football playing for DupontTyler Middle, McGavock High, and Mt. Juliet High School where he graduated May, 2020. Croquet and Uno was his favorite family games for competing with those he loved. During his short time here on earth, he made many investments for his crown of glory before God called for his return home. He received Jesus Christ as his Lord and Savior at the age of 10 from Tulip Grove Baptist Church where he was nurtured and disciplined as child of God. Tulip Grove is where he bonded with many of his closer friends from childhood. Ezekiel was smart, witty, and outgoing. He loved making people laugh. He loved working and helping others; starting his own yard mowing and cleaning service in his early teens. Ezekiel mentored many young boys in his neighborhood training in football, weightlifting, and exercising. He was a very hard worker with a loving spirt. He worked many hours walking five miles to work and home this fall to pay for the car he desired. Having his own place and car were just a few of his personal goals he accomplished. He was planning to attend college January 2021, but God had other plans (Isaiah 55:8). December 19, 2020 God's plan for Ezekiel's life here on earth was fulfilled as God called E-Z- to rest. He was greatly loved by his mother (Angelita Upchurch); father (Alexander Rogers); maternal grandparents (Kenny & Linda Upchurch); paternal grandparents (Linda Murray Carter & Tim Rogers); a very adoring sister (Kaitlin Upchurch); two maternal aunts (Nina Upchurch and Ramona Tharpe) and two maternal uncles (Nakia and Brandon Upchurch) and two paternal uncles (Josh Etherton and Clint Rogers.) Ezekiel had many close cousins that bonded with him like sisters and brothers(Justin Tharpe, Jaelin Gillard, [Tytan Upchurch, Daegen Upchurch, Zaybree Green whom lived within household], Jathan Beauregard, Andrew Upchurch, and Kennedy Upchurch.) Ezekiel made his special cousin Jaelin a video stating, "when you are sad, watch me on this video". Ezekiel loved the Lord. He loved discussing theological questions with his grandmother that he often tried to debate. We must always remember there are certain things in life we can not control. Life and death are both in the hands of God: to live is to die. And all is according to God's plan. Nonetheless, He allows us freedom of choice. Choose God and the son of God as Lord and Savior because His Grace and Mercy is sufficient to sustain you. Family will have a memorial service at a later date. Please keep the Upchurch and Rogers Family in your prayers.

The family of Mr. Ezekiel Malik Rogers created this Life Tributes page to make it easy to share your memories.

Send flowers to the Rogers family.