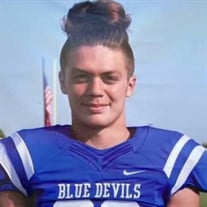 Lebanon, Tennessee 20 Dominic Belton D'Sean Cellucci Livingston MASKS REQUIRED. NO EXCEPTION! PLEASE BRING YOUR MASK. SECURITY STRICTLY ENFORCED. Dominic’s life was unexpectedly taken at the tender age of 20, which has left a void in the hearts of all of those who knew and loved him. Dom, as he was affectionately called by all those who knew him, was full of life and enjoyed being with his family and friends. From a young child to his last days, he lived and breathed football and had many successes throughout his schooling. Dom loved to workout, enjoyed swimming, was very athletic, and always up for a challenge or to compete in any way. He was a graduate of the Lebanon High School Class of 2020 in Tennessee. Dominic was handsome, smart, had a good heart, and would give anything he had or could to help others. Dom was admired and loved by his brothers and cousins and would always encourage and push them to be and do their very best. His brothers referred to him as their inspiration and superhero. Dom had no fear, was very tough and confident in all that he did, and discreet in many things at times. He was loyal and committed to whatever he was involved in. Dom had dreams of traveling the world and living his best life. Dom loved to eat especially chocolate, candy, chocolate chip pancakes, and his collection of sneakers. He was very sociable, well loved, and enjoyed hanging out and enjoying time with his friends. He made sure his friends were treated with respect whenever he was around. Dom was charming, loving, and was always being comical and even sarcastic, as he always tried to make those around him happy and feel loved. Girls loved him and enjoyed his charisma. He could say something that would brighten your day. Dominic is preceded in death by his maternal grandfather who helped to raise him, Belton “Butch” Livingston, Jr. He leaves many fond and cherishable memories with his mother, Terace Livingston; his stepdad Nick Acree; his uncle who was also a father figure, Belton “Tony” Livingston III; his grandmother who helped to raise him, Sophie Livingston; his brothers, Larry and Bishop; aunts Shantelle, Angel, and Heather; uncle Boop; great aunt Loretta (Robert); cousins; and many friends and classmates. The family is appreciative of all the prayers, thoughts, donations, and expressions of love shown during this difficult time. Please keep the family in your prayers.

The family of Mr. Dominic Cellucci Livingston created this Life Tributes page to make it easy to share your memories.

Send flowers to the Livingston family.