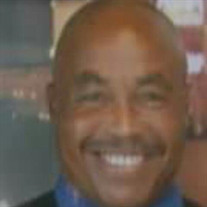 Oklahoma City, OK 57 He will be conveyed to Lebanon, TN for services and burial. DELMAS CLOYDE JACKSON, III Delmas Cloyde Jackson III was born August 6, 1960 in Nashville, Tennessee to the late Mr. and Mrs. Delmas (Earlene) C. Jackson, Jr. He was the second child of five including his still-born baby brother. As a young child, Delmas was already spunky and full of energy. When he was about three years old, the family relocated from Nashville to Oklahoma City due to his father's job transfer. At five years old, he entered elementary school as a Kindergartener at Edwards Elementary, Oklahoma City Public Schools. A year later, the family moved to Wildwood/Park Estates Neighborhood and he began attending Millwood Public Schools. While attending Millwood, he was a member of the Mighty Falcon Marching Band, Track team and Varsity Boys Basketball Manager. Delmas graduated from Millwood High School in 1978. He attended Oklahoma State University for two years but his love for music and entertainment would lead him in a different direction. Delmas was a music fanatic and could "Re-Run" dance with the best of them. The love for music and dance led him to become a super bad Dee-Jay, better known as "Moon Man!" He perfected his craft and became known all across the state of Oklahoma and beyond! He even created his own organization known as "MCC...Moon Control Club!" He threw the best parties that nobody wanted to miss! Especially on New Year's Eve! Being a popular party Dee-Jay led him to become a Radio Dee-Jay of the Quiet Storm on KAEZ and eventually a Concert Promoter. He brought acts to town from Maze featuring Frankie Beverly to Marvin Gaye to Kool & the Gang. Delmas had many fond memories and good times about those days. Years later following his Music and Entertainment career, as well as ups and downs.. Delmas relocated to Nashville, Tennessee and then Las Vegas, Nevada. Although he wasn't in Music and Entertainment, he was still doing what he did best...talking..He was a Tourist Guide in the city of Las Vegas and enjoyed helping and sharing information for folks to enjoy their trip out West. Especially if he came across someone from home (OK or TN). He enjoyed the Las Vegas sunshine and the positivity of life. After years of being away and his health somewhat declining, he moved back to Oklahoma City in 2016 to be closer to his daughter, grandchildren and other family. His health had its ups and downs but he continued on with life through the strength of God. God called Delmas home on Friday, September 8th, 2017 in Oklahoma City, OK. He loved his family, loved a good time, loved to laugh and share memories. Most of all, he loved the Lord and declared Jesus Christ was his Lord and Savior. He was loved dearly and will be greatly missed by family and friends. He was preceded in death by his parents and baby brother. He leaves to cherish his memory: One Daughter, Vazhe; One Grandson, Malachi; one Granddaughter, Beautiful all of OKC. His big brother Brian of Houston, Baby Sisters Danielle of OKC and Denise of Dallas. Four nieces and four nephews. Two great-nieces and six great-nephews. Three Paternal Aunts, Charlene Robertson of Mt. Juliet, TN, Eleanor Caruthers of Needmore, TN and Mary Martha Johnson of Nashville, as well as many Cousins and special friends. John11: 25-26.."I am the resurrection and the life. The one who believes in me will live, even though they die; and whoever lives by believing in me will never die..."

The family of Mr. Delmas Cloyde Jackson III created this Life Tributes page to make it easy to share your memories.

He will be conveyed to Lebanon, TN for...

Send flowers to the Jackson family.