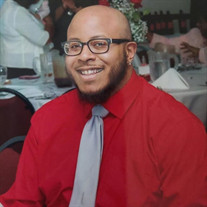 Ottawa, Illinois 31 SERVICES WILL BE LIVE STREAMED ON FACEBOOK PAGE OF NEUBLE MONUMENT FUNERAL HOME. In observance of the CDC guidelines, we are still practicing 6-foot social distancing and Mask requirement/temp checks strictly enforced. The family understands that due to the current concerns regarding large gatherings, many who wish to show their love and support in person will be unable to do so. Therefore, they would like to express their gratitude for all the thoughts and prayers extended to them at this time. We encourage you to leave condolences to the family via our website at www.neublemonumentfuneralhome.com. Brandon Jerell Farr was born in Nashville, TN April 25, 1989. God in his infinite wisdom deemed it necessary to withdraw Brandon from our midst on February 11, 2021. Brandon was preceded in death by his grandparents: Jessie Mable Farr, MP Farr, Sr. and Martha Sneed; great grandparents: Robert and Mary Randolph; Randolph great uncles: Felix, Harold, James, Robert Allen, Alvin and Tolbert; Farr aunts and uncles: Charles, MP, Rayfield, Mary Berry and Ramona. He grew up in LaVergne, TN where he graduated from LaVergne High School in 2008. Brandon loved cheerleading and was an All-Star Cheerleader for Premier All-Star. He attended Tennessee State University and the University of Arkansas, Pine Bluff and was a member of their Cheerleading squads. He attended the Art Institute of Nashville and later relocated to Ottawa, IL where he worked in the hospitality industry. Brandon enjoyed cooking, music and being with his friends and family. Brandon was such a loving person who always had a smile on his face no matter what he was going through. He never met a stranger and he lived his life to the fullest. The legacy and memory Brandon leaves will be cherished by his parents, Jesse and Brenda Farr; devoted and loving sister, Jesseca Farr; grandmother, Willie “NaNa” Elizabeth Sneed; grandfather, James A. Sneed; aunts: Deyonda Salas (Ricardo), Pattie Farr, Annie Farr and Gloria Farr; uncles: JC Sneed (Leslie) and Tony Farr; great aunts: Sallie Lyons-Camp and Henrietta Sanders; god-parents,Keith and Anne Figgins; god-sister, Keianne (Mario) Holder; god-brothers: Keion and Keith, Jr. Figgins; fur-nephew, Benjamin; devoted cousin, Brianna Weakley and a host of other cousins, family and friends too numerous to mention by name. Neuble Monument Funeral Home LLC is in charge of service. Please keep the Farr family in your prayers.

The family of Mr. Brandon Jerell Farr created this Life Tributes page to make it easy to share your memories.

Send flowers to the Farr family.