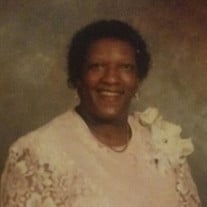 Lebanon, Tennessee 71 Passed away at University Medical Center. Bessie Mai Cowan Richardson having been blessed to be the fourth child for her now deceased parents, Henry C. and Sallie Cowan. She arrived on the twenty fifth day, the month... View Obituary & Service Information

The family of Mrs. Bessie "Baby Sister" Richardson created this Life Tributes page to make it easy to share your memories.

Passed away at University Medical Center....

Send flowers to the Richardson family.