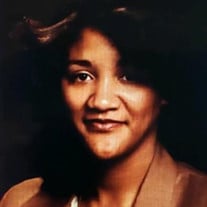 Maitland, Florida 61 Passed away at her residence. Bertha Ruth Randolph Holloway Was Born April 15 1960 to the late Allen H L & Peggy Jean Randolph .She slipped away from this life October 2021 with the hope of eternal life when The Life... View Obituary & Service Information

The family of Mrs. Bertha Randolph Holloway created this Life Tributes page to make it easy to share your memories.

Passed away at her residence.
Bertha Ruth...

Send flowers to the Holloway family.